As soon as we arrive at the Big Bay Lighthouse, we are given a tour of the building.  The lighthouse was built in 1896 as a duplex.  One side housed the lighthouse keeper and his family, and on the other, the assistant and his family.  It became a bed and breakfast in 1986.

The next morning, we drive over to Thomas Rock, an overlook where you can see Independence Lake, Big Bay, and the Keweenaw Peninsula.  There is a short, but very nice nature trail leading up to the vista.

From here we head back to Marquette to see more of the town.  After walking around Presque Isle Park, we are just in time to see an iron ore ship loading up at the ore dock.

The following day we leave the lighthouse after breakfast and stop at the Michigan Iron Industry Museum in Negaunee.  The museum is very well curated and also has beautiful trails just outside situated above the Carp River.  Here I learned that the first modern ore dock, built in 1859 in Marquette had originally taken 6 days to load 300 tons of ore onto the ships, but by the mid-20th century it improved to over 12,000 tons of ore being loaded in 16 minutes.

Next we stop at Lawry’s Pasty Shop in Ishpeming and pick up a family pack of pasties.  We stop at the Canyon Falls Roadside Park to eat.  We sit under a canopy of trees, the leaves have turned yellow and are slowly fluttering down in the breeze.  The pasties are delicious and after every bit is eaten, we walk the beautiful trail to the waterfall. 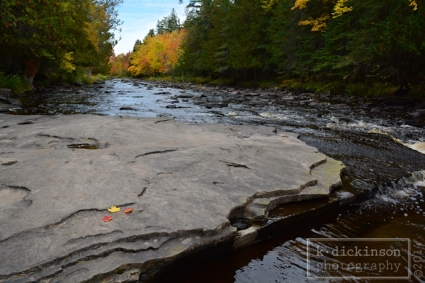 The trail to the waterfall is relatively short, but it is so photogenic, it would be easy to spend an entire afternoon here.

Back on the road, we make another stop in Houghton.  My mom and dad stretch their legs while Matt, Chris and I pop in to Keweenaw Brewing Company.

Our next stop is the Keweenaw Mountain Lodge in Copper Harbor.  More pics from the Keweenaw Peninsula next week!